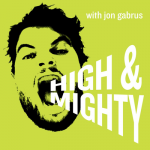 Gabrus’ interests are all over the place…and so is this podcast. He interviews friends and celebrities, some who are both. About the kind of stupid stuff that a nerd/meathead/manchild would be into. Tangents are not only allowed, they are encouraged.

Comedian and writer Jamie Lee joins gabrus to talk about the mother of all carbs, pasta.

Advertise on High & Mighty via Gumball.fm.

Shout out to Hello Fresh for sponsoring this episode of High & Mighty. Go to HelloFresh.com/high12 and use code high12 for 12 free meals, including free shipping!